A man arrested with a baby chimp in Nanga-Eboko 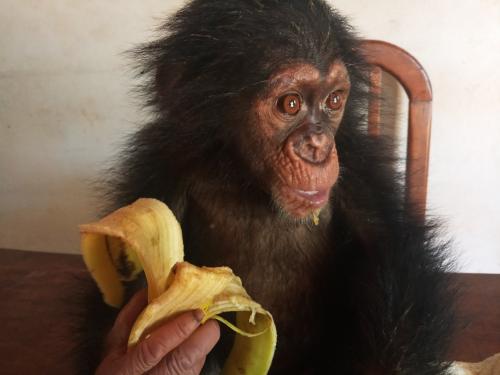 A man has been arrested in Nanga-Eboko in the Center Region for chimp trafficking. He was arrested during an operation carried out by wildlife officials of the Upper Sanaga Divisional Delegation of Forestry and Wildlife with the technical assistance of LAGA, a wildlife law enforcement organisation.

The suspected trafficker was caught at the riverbank of the Sanaga river some 6km from Nanga Eboko with a baby chimp loaded in a tiny cardboard box. He was arrested during his attempt to illegally smuggle the animal to Nanga Eboko to sell after travelling dozens of kilometers to the banks of river. He was later taken to the Forestry and Wildlife office for interrogations where he tried to escape but was swiftly captured and taken to the gendarmerie brigade of Nanga Eboko.

According to preliminary investigations, the suspect has once been arrested for the same kind of illegal wildlife activity. He got the baby chimp from an area commonly known as "Ndondzoua" believed to be a hotbed for all sorts of bushmeat that is supplied to restaurants in Yaounde. It's believed that the baby chimp's mother was slaughtered to supply the burgeoning bushmeat trade in the area.

The chimpanzee   is totally protected according to the 1994 wildlife law of the country and is classified as an endangered species under the IUCN red list of threatened species. While its numbers were close to 2 million at the beginning of the 20th century, today they do not exceed 500,000 and this is not a great figure. The problem is the same everywhere you find the chimp. For example there are less than 6000 chimpanzees in the wild in the Nigeria - Cameroon border area that is home to the Nigeria - Cameroon chimpanzee. The chimpanzee is hunted and used for mystical and traditional rituals in Central African countries, as well as its meat. While big chimpanzees are killed for their meat, the small ones are captured alive and sold as pets. Many conservationists believe that trade in wildlife especially in chimpanzee does not only threaten the species but is greatest threat to biodiversity thus, the species conservation is important.