A woman arrested with mandrill 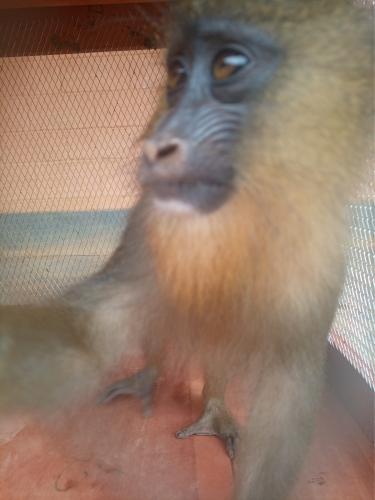 A woman has been arrested in Mintom in Dja and Lobo Division for trafficking in a baby mandrill.

She was arrested during an operation carried out by wildlife officials of the Dja Biosphere Reserve, in collaboration with the Gendarmerie Brigade of Djoum.

She was caught on the street when she was just about to sell the baby mandrill. The operation was also carried out with the technically assistance of a wildlife law enforcement organization known as LAGA.

According to sources close to the matter that spoke on condition of anonymity, the alleged trafficker works in close collaboration in trafficking mandrills with her father who is a traditional chief. The traditional chief also lends his gun for poaching that he activates and regularly supplies the live animals to the daughter.

The same sources c, said the trafficker wanted to sell three mandrills including the baby mandrill to a regular buyer at Mekoto village situated close to Gabon and the Republic of Congo.

Unfortunately, two of the mandrills died few days before they could be rescued. Meaning the team could only rescue one of the mandrills.  Shortly after the rescue operation the Director of LAGA, underlined the importance to rescue baby primates in captivity as fast as possible. He said "The plan was to rescue two mandrills but one died the day before the operation, showing how crucial it is to rescue these baby primates fast as they live on borrowed time."

Mandrills, which live mostly in the tropical rainforest, are the world's largest monkey. They are primarily found in Southern Cameroon, Gabon, Equatorial Guinea, and the Republic of Congo. The species is facing a high risk of extinction in the wild as they are often hunted as bushmeat and many Africans considered them as delicacy.

The mandrill is totally protected in the country and any illegal detention or trade in the species is punishable by the 1994 wildlife law governing the wildlife sector.