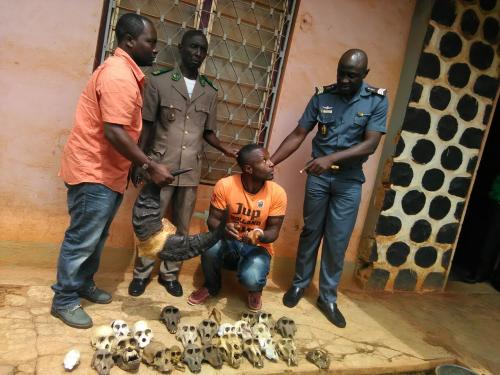 Despite many obstacles, tangible achievements were made over this period in LAGA’s collaboration with MINFOF in the fields of investigation, arrest, prosecution, media exposure, government relations and international activities with focus on the fight against corruption, illegal wildlife trade, principally traffickers in ivory and ape skulls. Ivory networks were given special attention with several ivory traffickers arrested through the use of old techniques and tactics that were revamped, polished and used. Ape traffickers were targeted within this period as a growing trend was uncovered with ape traffickers getting more and more organised. Trafficking in several other wildlife species equally drew the attention of the investigation and operations teams with several other arrests made. There was an intensification of operations against traffickers in leopard skins that received fresh attention after a long period of almost no activity on leopard skin trafficking. The investigation department grew in ambition and focused much of its investigations on very important targets and improvement in the quality of results was witnessed during the year.

34 major traffickers were arrested, at a rate of one for each 11 days period. 71 % stayed behind bars from the day of arrest. Corruption was observed and combated in a number of the cases. 34 new cases were brought to the courts and 36 traffickers were convicted and given prison sentences, fines, damages and penalties and damages and fines amounted.

The LAGA team hosted activists from other countries for an intense training program including legal advisers and investigators from Senegal, Guinea, and Madagascar. , The Head of Investigations Department of EAGLE Uganda, the Assistant Coordinator, Coordinator from Benin equally visited the country . The EAGLE Financial Officer equally visited the country for finance management assistance. The Deputy Director travelled to the US for a series of meetings with government officials and to participate in a workshop on the illegal bushmeat trade in Central Africa. LAGA Head of Investigations provided operation assistance in Senegal.

Governance issues and breach of procedure by some MINFOF delegations were observed. Refusal to prosecute wildlife traffickers and subsequently releasing them, influence peddling and threats were observed. Also sidelining of the organisation during some important events was equally observed and phone calls were made to officials to show disagreements .