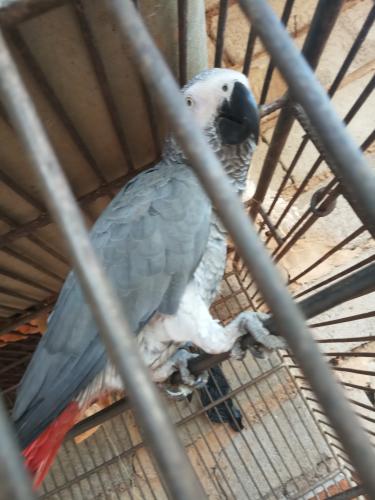 Two parrot traffickers have been arrested with three African grey parrots and six Rose-ringed parakeets in Yaounde during a crackdown operation carried out by wildlife officials of the Center Regional Delegation of Forestry and Wildlife in collaboration with the Gendarmerie Company of Yaounde II. The operation was technically assisted by a Non-governmental Organization called LAGA.

The first trafficker was arrested selling two African grey parrots and four Rose-ringed parakeets on the roadside at the Vogt junction. Meanwhile, the owner of the parrots was arrested at his residence at the Biteng neighborhood one hour later on the same day with one additional African grey parrots and two Rose-ringed parakeets. He is a big time trafficker belonging to a major parrot trafficking network in the country and has been the subject of several investigations in the trafficking of African grey parrots. He always managed not to be caught. He fell into the dragnet of wildlife officials and was arrested alongside his accomplice and put behind bars at the Gendarmerie Company of Yaounde II. Against the procedure on the prosecution of wildlife traffickers, the Company Commander unilaterally released them and they had to be rearrested.

During the second arrest, one of the traffickers tried to flee but was chased and caught inside a small stream at the Biteng neighborhood. He regularly supplied parrots and other birds to the roadside vendor who proceeded to selling them in tiny little cages at the Vogt Junction to the view of everyone who passed at the junction and to the bewilderment of those who know that the law totally protects African grey parrots.

According to sources close to the matter who requested anonymity, they belong to one of the biggest parrot trafficking networks in the country. The matter has been forwarded to an examining judge who shall continue with the procedure. The African grey parrot is the most heavily traded wild bird, and African grey parrots and Rose-ringed parakeets are totally protected. It is totally forbidden to trade in the species according to legislations governing the wildlife sector. Despite restriction to trade in wild birds in the country, the illegal trade in African grey parrots continues to be marred by corruption and complicity.  During the Conference of Parties to the Washington Convention that held in 2016 in South Africa, African grey parrots were upgraded to Appendix I translating as a ban on the international trade in the species and the birds were uplifted to the class of totally protected species in Cameroon following the international ban.  The species has suffered from its ability to imitate human speech, making it a well sought after pet and the trade that has driven a decline of almost 90% in population over the last two decades.