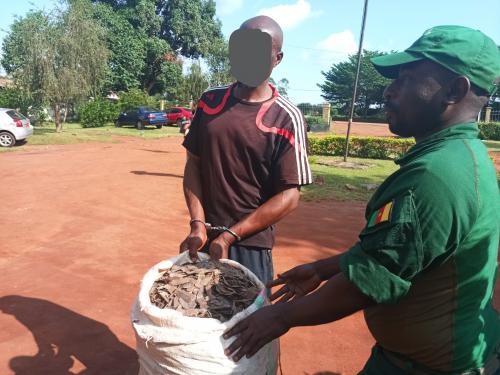 A man has been arrested in Dimako for trafficking in pangolin scales. He was arrested during a crackdown operation carried out by wildlife officials of the Upper Nyong Divisional Delegation of Forestry and Wildlife in collaboration with the Police of Abong -Mbang. He was apprehended at his home with close to 60kg of pangolin scales packed in a bag, as he was just about to go out and sell the scales. LAGA, a wildlife law enforcement organisation technically assisted officials during the operation.

The suspected trafficker, who also doubles a second hand clothes trader, used his business as a cover to illegally trade in pangolin scales. He would move around some villages close to Dimako to sell second hand dresses and buy pangolin scales from small time traffickers he activated in the various villages. He would then transport and stock the scales in Dimako where he resided.

The trade and demand for pangolins have made pangolins either vulnerable, endangered or critically endangered as classified by International Union for Conservation of Nature (IUCN) depending on the various species. According to an IUCN report of 2016 on the status, trade and conservation of pangolins, more than one million pangolins were illegally traded in ten years leading to the publication of the report. Thus making the species the most trafficked mammals in the world. The 60kg of pangolin scales seized from the trafficker represents about 300 slaughtered pangolins.

In an effort to save the species from extinction, the government has been cracking down on pangolin scales traffickers through an effective application of the wildlife law of the country that states that anyone found in possession of parts of a protected wildlife species is considered to have killed the animal and is liable to a prison term of up to 3 years and/or pay a fine of up to 10 million CFA francs.