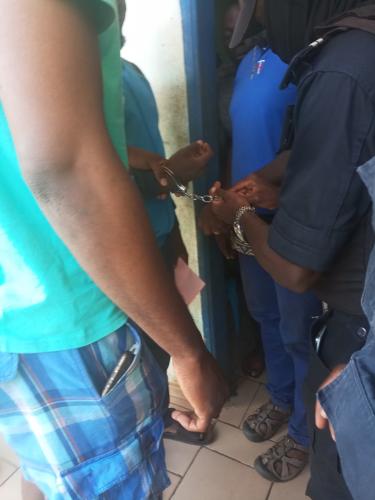 Six suspected wildlife traffickers have been arrested in Bertoua and Yokadouma in connection with the trafficking in ivory in the East Region. They were arrested during a crackdown operation carried out by the Divisional Delegation of Forestry and Wildlife of Lom and Djerem in collaboration with the Police. The operation was carried out with the technical assistance of LAGA, a non-governmental organisation specialized in wildlife enforcement.

Two of the suspects were arrested on December 2, at the Ngaikada neighborhood in Bertoua with four ivory tusks including two from baby elephants. One of the two suspects travelled all the way from Yokadouma to Bertoua with the ivory tusks skillfully concealed in a traveling bag for an illegal transaction. They were caught as they tried to carry out their illicit transaction, taken and kept at the Police facilities.

Further investigations led to the arrest of four other suspects among whom is  a Nigerian national and a repeat offender who was arrested and sentenced in 2016 for the same offence. They were arrested in Yokadouma in the night of December 2 and the following day on December 3 and later moved to Bertoua to join the two others for the prosecution process that is expected to indict them for illegal killing and sale of protected wildlife species. . According to a source close to the case who requests for anonymity, the six suspects belong to an organized ivory trafficking network. Preliminary investigations also reveal that they have connections to Nigeria where it seems they had been trafficking ivory over the border.

Elephants are listed in the class of totally protected species in the country. They are considered to be keystone species due to the important role they play in the environment and one of the biggest threats to elephant populations is the ivory trade as they are highly poached for their tusks. African elephants are listed as vulnerable by the International Union for Conservation of Nature (IUCN) on their Red list of threatened species.

The 1994 wildlife law states that anyone found in possession of a totally protected species is liable to a prison term of 3 years and/or pay a fine of up to 10 million FCFA. Elephants are classified as protected species and the trafficking of elephant's part is totally prohibited.