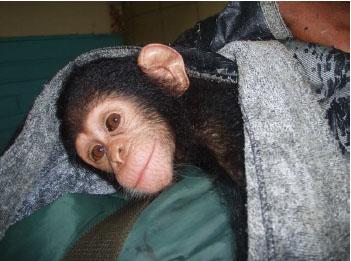 Significant progress was made over this period on many aspects of LAGA’s collaboration with MINFOF, with tangible achievements not only in the fields of investigation, arrest and prosecution but also in media exposure, government relations and international activities with more focus on the fight against corruption, wildlife trade especially networks of ivory traffickers and dealers in primates. 36 dealers were arrested during this period.

During this period, LAGA won another award - The Future for Nature Award in the Netherlands, given to individuals for internationally outstanding species protection efforts. The award was received by the LAGA Director, Ofir Drori in Holland and his presentation ended with three main messages that LAGA tries to put on the map - Anti-poaching in protected areas is not wildlife law enforcement, Activism and Fighting Corruption.

For every 5 days a major wildlife dealer was arrested, 86% stayed behind bars from the day of arrest. Corruption was observed and combated in more than 80% of the cases. Regional wildlife law enforcement became more effective with good operations and prosecutions. LAGA was invited by International Law Enforcement Academy to train in the first anti-corruption program, regional collaboration among the projects increased with planning regional crackdowns and a presentation was on regional law enforcement at first Interpol specialized environmental conference organized by Interpol Central African Regional Bureau in Yaounde – Cameroon. Training sessions continued in Yaounde with PALF-Congo investigator trained. AALF – Gabon Investigator and Jurist also arrived for training.