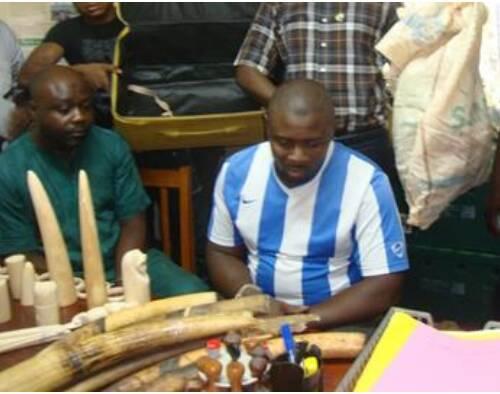 Despite many obstacles, tangible achievements made over this period in LAGA’s collaboration with MINFOF in the fields of investigation, arrest, prosecution, media exposure, government relations and international activities with focus on the fight against corruption, wildlife trade especially international networks of ivory traffickers, Chinese traffickers of giant pangolin scales, dealers in primates, sea turtle shells etc. 24 dealers were arrested during this period.

For every 7.5 days a major wildlife dealer was arrested, 96% stayed behind bars from the day of arrest. Corruption was observed and combated in more than 80% of the cases. Regional wildlife law enforcement became more effective with good operations and prosecutions. Replication started in Togo and TALF becomes the newest member of our Regional Wildlife Law Enforcement Network. Training sessions continued in Yaounde with GALF – Guinea Conakry Investigator arriving for training; and 2 LAGA Investigators traveled to AALF Gabon to experience operations with customs and to carry out trans-boundary investigations. LAGA Director was invited by the European Parliament to speak in a joint hearing of Development Committee and Organized Crime, Corruption and Money Laundering Committee. LAGA and PALF participated in CITES 16th Conference of the Parties (CoP) in Thailand on the Cameroon and Congo government delegations.

Governance issues, lack of collaboration and breach of procedure by some MINFOF Delegations were prominent during this period - sabotaging investigations, not participating in operations and writing of PV, unprocedural release of arrested dealers etc. Because of these and other prior governance issues, a joint letter was addressed to the Minster – MINFOF by LAGA, WWF and WCS to immediately remedy the situation. Specifically for LAGA, more criminals had been illegally released by MINFOF Delegates in the past year than in the whole of 10 years of work that preceded it, combined. Two criminal investigations are held concerning ivory stock management and CITES, joining a worrying trend of unprecedented governance problems in MINFOF.