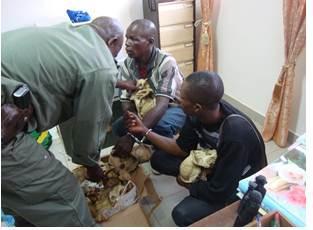 Despite many obstacles, tangible achievements were made over this period in LAGA’s collaboration with MINFOF in the fields of investigation, arrest, prosecution, media exposure, government relations and international activities with focus on the fight against corruption, illegal wildlife trade, principally traffickers in elephant bones, ivory and primates. The international networks of ivory traffickers were given special attention through an innovative tactic in targeting them through other elephant parts while operations also focused on chimpanzee and gorilla bones trafficking, dealers in live primates, dealers in leopard skins and giant pangolin scales etc. 20 dealers were arrested during this period.

For every 9 days a major wildlife dealer was arrested, 90 % stayed behind bars from the day of arrest. Corruption was observed and combated in more than 80% of the cases. Regional wildlife law enforcement became more effective with good operations and prosecutions. Replication started in Senegal and SALF became the newest member of our Regional Wildlife Law Enforcement Network. Training sessions continued in Yaounde with a jurist from Kenya undergoing training with LAGA. LAGA Director travelled to Kenya shortly after he regained his health following the crocodile attack in December in Ethiopia to lay the ground work for a new replication project and the EAGLE network.

Governance issues, lack of collaboration and breach of procedure by some MINFOF Delegations were prominent during this period – sabotaging operations by refusal to carry them, stopping the writing of PV, refusal to sign PV by sworn official, etc. Because of these and other prior governance issues, correspondences were addressed to the Minister of Forestry and Wildlife for the situation to be redressed.