2 traffickers arrested with a lion and leopard skin 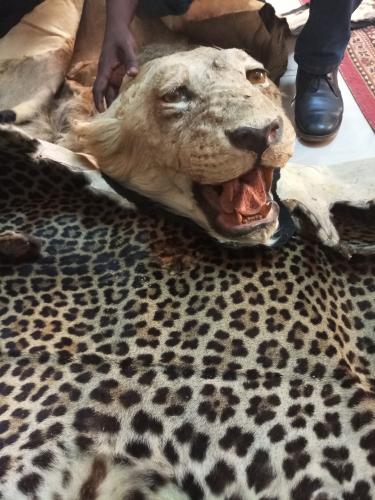 Two people have been arrested for lion and leopard skins trafficking in Yaounde, the capital city. They were arrested during a crackdown operation carried out by wildlife officials of the Center Regional Delegation of Forestry and Wildlife, in collaboration with the Nlongkak gendarmerie brigade. The arrest was carried out with technical assistance from the Last Great Ape Organisation - LAGA, a wildlife law enforcement organization. A tanned lion and a leopard skins were found and seized during their arrest.

One of the traffickers, a craft artist, was arrested on the 6th of August 2020 at the Etoa-Meki neighborhood when he was about carrying out an illegal transaction that involved the sale of a lion and leopard skins. He was found with a travelling bag with the two feline skins skillfully packed inside.

Further investigation by wildlife officials led to the arrest of the second trafficker, a retired high school teacher. She was apprehended hours later at the Efoulan neighborhood and taken to the gendarmerie brigade at Nlongkak. According to sources close to the case, she gave both the lion skin and leopard skin to her accomplice to sell.

The lion also known as Panther leo is a species in the family felidae and a member of the genus panther. Despite it biological importance and the fact that it is one of the flagship species for the tourism industry, the lions are threatened in what remains of their distribution, says lion specialist and Coordinator of the Centre for Environment and Development Studies, Pricelia Tumenta.   She equally states that Cameroon is an important country for the species, comprising the second population (over 270 lions) after the DRC for Central Africa. However, the species is exposed to human pressure such as the destruction of their habitat and poaching.

Lions are listed as a vulnerable species by the International Union for Conservation of Nature�s (IUCN) Red List of Threatened Species. Their population dropped 43 percent between 1993 and 2014, with only around 20,000 alive today in Africa. Each year on August 10, is celebrated the World Lion Day around the globe to bring awareness of the declining population of the species. Big cats are increasingly being slaughtered for their skin use for luxury home decor and taxidermy. Their teeth and claws are likely made into jewelry and amulets sold in some Asian countries.

Lions as well as leopards are totally protected by the 1994 wildlife law and anyone found in possession of their skins is liable to a prison term of up to 3 years and or pay a fine of up to 10 million francs.