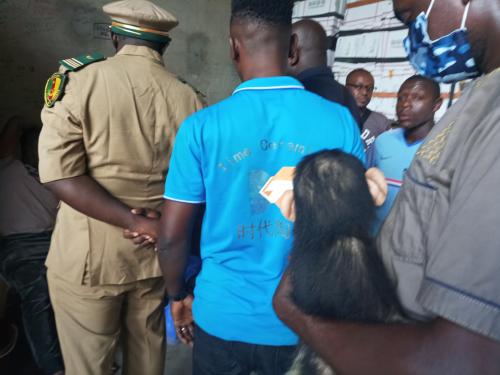 Four people have been arrested in Douala for stealing and trafficking in a baby chimp from a sanctuary.

They were arrested on September 28, 2021 during a crackdown operation carried out by wildlife officials of the Littoral Regional Delegation of Forestry and Wildlife, in collaboration with the Police. The operation was technically assisted by the Last Great Ape Organisation (LAGA), a wildlife law enforcement support body.

Two of the alleged wildlife traffickers were apprehended on the spot, with the baby chimp in a storeroom close to a Chinese tiles shop at Nkoulouloun, a popular neighbourhood in Douala. Meanwhile, two others, including the brain behind the trafficking who is also the owner of the storeroom were napped days later in the same storeroom by wildlife officials working in collaboration with the police. Information about the loss of a baby chimp at a chimpanzee sanctuary led to investigations being carried to determine the whereabouts of the animal. This led to the discovery of a baby chimp at the storeroom.

The chimp was found with wounds all over his body and, looked malnourished.  Preliminary investigations also show how the chimp was aggressively tossed around and, kicked by people who were supposed to be taking care of the animal.

Under the Convention on International Trade on Endangered Species (CITES) regulations and laws, for which Cameroon is a signatory, the chimpanzee is classified as an Appendix 1 species. This means that trade in chimpanzees and parts are completely banned and the 1994 wildlife law of the country states that anyone found in possession of a whole of a protected species, shall be considered to have captured the animal and is liable to a prison term of up to 3 years and/or pay a fine of up to 10 million CFA francs.

Chimpanzees share 98% of human's DNA, making them very susceptible to human borne diseases such as Ebola - a problem that surfaces as the result of human growing population in their space. Human encroachment and human activities such as logging and mining pose huge threat to chimpanzee population as well as illegal trade. Chimps are mostly killed for food than to fuel the illegal wildlife trade. However, because they live in troops, and are very protective of their own, the adults are often killed as the only way to obtain the baby chimps.