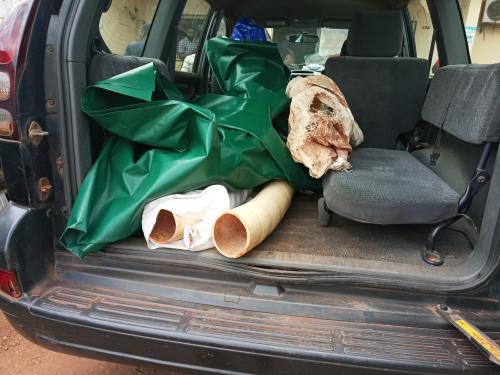 The son of a former finance minister has been arrested alongside four others for trafficking in wildlife products. They were about to carry out an illegal transaction involving the sale of two ivory tusks when wildlife officials arrived the scene at the Omnisport neighbourhood in Yaounde. The arrest was done during the crackdown operation led by the Centre Regional Delegation for Forestry and Wildlife in collaboration with the Ngousso Gendarmerie Brigade in Yaounde. A nongovernmental organization called LAGA technically assisted the operation

The former finance minister’s son aged 44 transported the tusks in his black Toyota Prado car, accompanied by his accomplices to   the Omnisport neighourhood where they were just about to off load the ivory from the trunk of the car when gendarmes and wildlife officials swooped in and arrested all five.  The suspects were found in illegal possession of two big ivory tusks weighing over 50kg. According to eye witness accounts, one of the suspects sensing danger, attempted to pass through the dragnet. He slowly and confidently walked away from the scene but was quickly recognized, stopped and arrested alongside the others.

The two ivory tusks were unusually big and weighed over 50kg indicating they were cut from a big elephant, something which is not very common today. Elephant tusks weighing over 20kg are difficult to find nowadays and some experts suggest this could be the result of intense poaching of elephant in the sub region with individuals in the various herds not allowed to grow to big enough sizes or are simply shot dead before they attain their full size. They also say this is also an indication of the fact that the elephant would have been killed in the savanna region because forest elephants have smaller ivory sizes.

According to sources close to the operation that requested for anonymity, investigations carried out in Douala indicated that some members of the group were closely connected to the syndicate of pangolin scales and ivory traffickers who were arrested in Douala in March 2019. The information obtained enabled wildlife law enforcement officials to put strategies and carry out the operation in Yaounde. The Douala operation saw the arrest of 6 people with close to 2 tons of pangolin scales and over 73 ivory tusks.

The trafficking of elephants parts is totally prohibited and the animal is classified as protected according to the wildlife law governing the sector. The law stipulates that anyone who is found in possession of any part of a protected wildlife species is considered to have killed the animal and is liable to a prison term of maximum 3 years and or a fine of up to 10 million FCFA. All five are held in custody pending the completion of the prosecution file that is expected to be forwarded to the state counsel.