A customs official arrested with a live mandrill 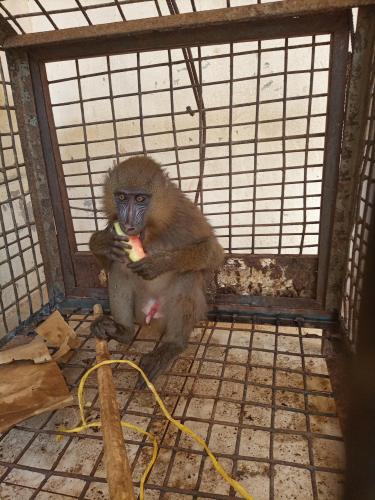 A customs official has been arrested in the frontier town of Ambam in the South region of the country for trafficking in mandrill. He was arrested by wildlife officials of the Divisional Delegation of Forestry and Wildlife of the Ntem-Valley in collaboration with the Ambam Gendarmerie Company. A wildlife law enforcement support body known as LAGA provided technical assistance during the operation.

The suspected trafficker was arrested with a live mandrill in a filling station at the entrance of the town with the animal chained round its waist. According to prior investigations, he travelled with the mandrill in his car from Kye-ossi to Ambam to sell the animal. He stopped at the filling stations to fuel his car when wildlife officials who had been hinted of his illegal wildlife activities sprang into action and arrested him.

Further investigations led to the summoning of the Chief of Post of Forestry and Wildlife at Kye-ossi who is suspected to be an accomplice in the mandrill trafficking. According to investigation reports, the customs official is not a novice in illegal wildlife trafficking. He has been detaining the mandrill for close to a year with intentions to sell the animal. He seemingly used his status as a customs official to buy and sell primates in the region. According to a sources close to the case who request for anonymity, this is the second mandrill he is selling after successfully selling the first. The same sources say, the official gets primates from a poacher at Lélé close to Djoum that is considered a hotbed for trafficking.  The trafficking in primates especially the trade in mandrill is becoming recurrent in the country. Following LAGA's annual report of 2020, 3 live mandrills were rescued from wildlife traffickers in Yaounde, Lolodorf, and in Kribi. The trade in mandrills exposes both humans and the animals to zoonotic diseases. More so, primates are as fragile as humans and primatologists believe that constant humans contact with these animals render it more vulnerable because humans can also transmit diseases to animals whereas they may not have the necessary immunities for the diseases. It's therefore of extreme importance to protect and save the species.

The International Union for Conservation of Nature (IUCN) red list of endangered species, lists mandrills as vulnerable and endangered. They are equally totally protected according to the 1994 wildlife law of the country and trafficking in the animal is prohibited. The law states that if anyone is found in possession of whole or parts of a protected wildlife species is considered to have captured or killed the animal and is liable to a prison term of up to 3 years and or a fine of to 10 million CFA francs.