A man arrested with 331kg of pangolins & 3 leopard skins 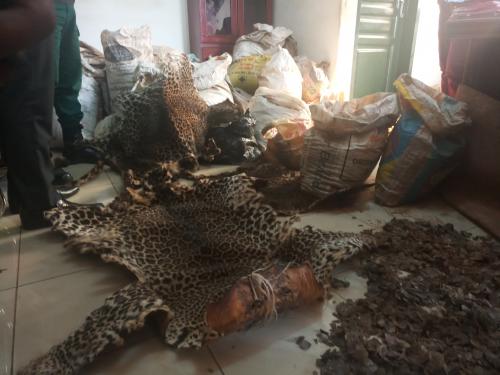 A man has been arrested with 331 kg of pangolin scales representing 1.600 pangolins killed, at the Briqueterie Neighbourhood in Yaounde.

He was arrested during a crackdown operation jointly carried out by officials of the Regional Delegation of Forestry and Wildlife and the Gendarmerie Brigade of Nlongkak with technical assistance from LAGA, a wildlife law enforcement organisation.

The 24-year was apprehended in his perfumery and bags of pangolin scales found during a search that was carried out by law enforcement officials in 3 different shops he used to pack the scales. 331 kg of pangolin scales and 3 leopard skins were uncovered from the piles of bags concealed in the shops. He was quickly removed from the Briqueterie neighbourhood and taken to the Nlongkak Gendarmerie Brigade as crowds moved during his arrest.

According to the Adjoudant Chef, Mboutou Claude who is the Nlongkak Gendarmerie Brigade Commander, "it is thanks to a collective work with the Forestry and Wildlife Ministry and LAGA that such huge seizure was possible". He equally said that the Brigade will continue to investigate the matter.

According to sources close to the case who spoke on anonymity, the man is connected to several pangolin trafficking rings in the country and beyond particularly to Nigeria where he had been regularly shipping pangolin scales. He was just about to ship the scales to Nigeria before law enforcement stormed in to stop the move. He equally has ties to international trafficking syndicates. He is suspected to carry out the illegal business with other members of his family including his mother, a woman of Nigerian origin and a brother who lives in Nigeria.

The sources equally said that the seized pangolin scales are partly from Cameroon, Congo and Gabon with Kye- Ossi as the main transit town.

The illegal trade in pangolin scales has picked up stem recently following a difficult last year for traffickers who found it challenging to move their contraband.  Restricted mobility because of the Covid 19 pandemic created problems for everyone including traffickers but they have since learned how to live with the difficulties. They seem to be relishing the moment and are now on the offensive illegally trafficking pangolin scales.

Law enforcement is equally relishing the moment and for a good reason according to Harouna Nyandji, the Divisional Officer of the First District of Yaounde who declared shortly after the arrest that "The animals are not just protected for fantasy, but are totally protected because the lives of the animals positively influence our human lives"

It is important to note that pangolins are totally protected in Cameroon and the wildlife law of the country prohibit any form of possession of the animal.