A trafficker arrested with over 77kg of pangolin scales 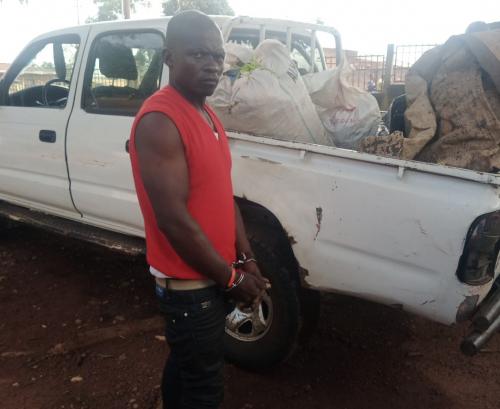 A man has been arrested for trafficking in pangolin scales in Bertoua.

He was arrested during an operation carried out by wildlife officials of the Divisional Delegation of Forestry and wildlife of Lom & Djerem, in collaboration with the Gendarmerie. The operation was technically assisted by a wildlife organization, the Last Great Ape Organisation also known as LAGA.

He was arrested with over 77kg of pangolin scales hidden under a black tarpaulin and concealed in a white pickup he drove to the place where he attempted to sell the pangolin scales in Bertoua. Following his arrest, reports reveal that the suspect is a public transportation driver plying the stretch of road between Bertoua and Lom Pangar.

Preliminary investigations show, the suspect activated several poachers in the region, particularly around the Lom Pangar Dam and supplied pangolin scales and other wildlife products to several traffickers. The reports stated that the alleged trafficker got the pangolin scales from villages including Deng Deng and Lom Pangar in the East Region.

When wildlife officials uncovered the contents of the bags that were found in the car, about a third of the scales were from giant pangolins. This species of pangolin is particularly more threatened with extinction than the other two species that the country has. The scales are not used locally but traded illegally to mainly Chinese traffickers who ship it out of the country to China where it is highly demanded for various reasons and used as beauty accessories, aphrodisiacs and as milk boosters for lactating women. Several studies say that pangolin scales are merely keratin, the same material that makes up human nails and hairs, and have no such purported healing properties.

The illegal trade in pangolin scales has picked up stem recently following the lifting of the ban on movements imposed due to the Covid-19 pandemic. Traffickers seem to be relishing the moment and are now on the offensive intensely trafficking in pangolin scales. On July 21, a wildlife trafficker was arrested at the Brigetterie neighbour in Yaounde with 331kg of pangolin scales representing 1.600 killed. Pangolins are totally protected and the wildlife law of the country prohibits any form of possession of the animal.