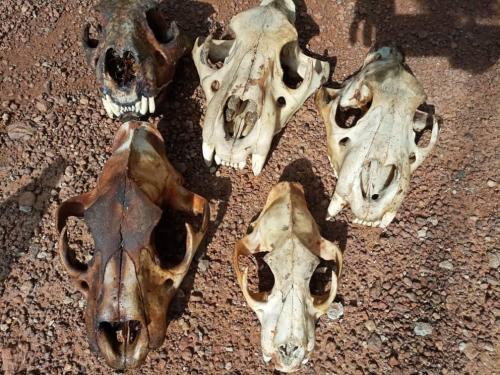 This month was marked by the arrest of 5 traffickers with pangolin scales, ivory, lion skulls, leopard skin and assistance given to Customs in the prosecution procedure against an arrested parrot trafficker.

4 traffickers were arrested with 96.5kg of pangolin scales. The group of two women and two men were specialized in dealing in pangolin scales and their main clients came in from Yaounde and Douala.  They activated a group of several smaller traffickers and bushmeat sellers in the region.

A policeman assigned to protect the Bouba Ndjidda National Park was arrested with a 5 lion skulls, a leopard skin, an ivory tusk, after he travelled more than 1000km from the park with products to the capital city. He was assigned to protecting the park but instead organized and ran the illegal trade in products obtained from the killing of animals in the park. He was central in a trafficking network from the north of the country.  Crackdown on lion part traffickers is becoming even more urgent as this is just a snapshot of the illegal trade in lion parts that is decimating the last few lions in in the country.
The Customs Mobile Brigade in Kribi arrested a trafficker with 20 African grey parrots and called for LAGA to assist in the interrogation and prosecution as apart of the newly established collaboration. The parrot trafficker is a repeat offender who had earlier been arrested twice but released. He seized the opportunities provided by the releases to continue to illegally trade in parrots. He is a Ghanaian national and part of an international network of Ghanaians specialized in trafficking African Grey Parrots.

The Deputy Director and the Director General of Customs installed members of the Customs-LAGA committee charged with implementing the protocol agreement.
The Assistant Head of the Media and External Relations Department travelled to the US under the International Visitors Leadership Programme.