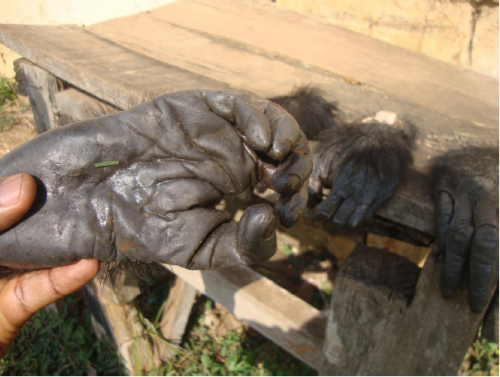 Tangible achievements were over this period on all aspects of LAGA’s collaboration with MINFOF including field investigation, arrests, prosecutions, media exposure, government relations, international and replication activities. There was more focus on the fight against corruption, wildlife trade especially networks of ivory traffickers and dealers in primates.

For every 7.2 days a major wildlife dealer was arrested, 94% stayed behind bars from the day of arrest and corruption was observed and fought in more than 80% of the cases. Operations focused on ivory trade which also uncovered trafficking in human parts. 51 new cases were brought to court, 28 cases prosecuted, 54 dealers convicted and more than $267,000 to be paid as damages to MINFOF. An International Investigator used to get more information about the Bouba Ndjida poachers and media exposure was at a rate of 1 media piece per day. The 8th edition of Wildlife Justice Magazine published and the Central African Wildlife Law Enforcement Newsletter was produced and distributed electronically. The convention of LAGA with the Government was renewed and signed by the Minister MINFOF.

During this period, LAGA won 3 awards - the Marsh Christian Trust Award, The Duke of Edinburgh Conservation medal given by Prince Philip and the Condé Nast Traveller Environmental Award. Regional wildlife law enforcement became more effective with good operations and prosecutions. Replication concretized in Guinea-Conakry with good operations and TALFF – Togo was launched. The LAGA Director was invited again by ILEA; invited to South Sudan to train wildlife officers, the police and judiciary and he also gave a presentation in Uganda on corruption during a GAPIN conference. Operation Hope (GAPIN II) of the WCO was successfully launched in Gabon with arrests.