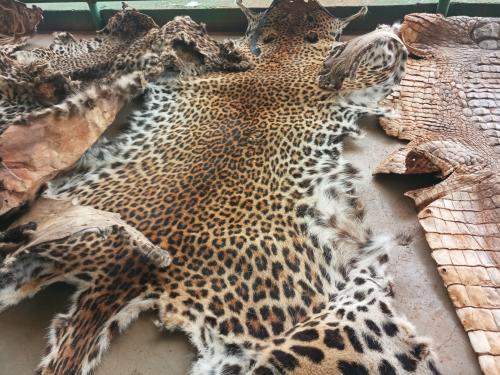 Four people have been arrested in Balessing, in the Menoua Division for trafficking in leopard and crocodile skins. A fifth suspect of the gang is on the run.

They were arrested last weekend during a crackdown operation carried out by wildlife officials of the Menoua Divisional Delegation of Forestry and Wildlife in collaboration with the Gendarmerie.

The suspects including a traditional chief were caught close to the Balessing junction along the Dschang - Bafoussam national road with 3 leopard skins and a crocodile skin.

A wildlife law enforcement support body known as the Last Great Ape Organisation (LAGA), technically assisted officials during the operation. According to sources close the matter that spoke on condition of anonymity, the traffickers are experienced in leopard skin trafficking in the region that is notable for the illegal trade in the feline skins. They obtained supplies of the skins from other regions in the country because the leopard is locally extinct in the West Region. The operation therefore comes to put an end to the suspected illegal business that has been going on for so long past.

It is worth noting that, the nature of African leopard is so peculiar that it has been described as "a cat of all tradesé in a report of a study carried at in February 2021, by the University of Copenhagen Faculty of Science.  This is due to the elusive, versatile and adaptable nature of the species.

However, the leopard, as well as the crocodile, are both vulnerable species facing a high risk of extinction in the wild as classified in the Red list of threatened species of the International Union for Conservation of Nature (IUCN).

Leopards and crocodiles are poached for their skins, bones, teeth, claws, and skins. Their skins and the aforementioned body parts continue to enter illegally in Asia. Their bones are believed to be medicinal and their skins used to produce luxurious fashion bags, dresses and shoes. Leopard and crocodile are totally protected species in the country according to its wildlife law and trafficking in the species is prohibited.