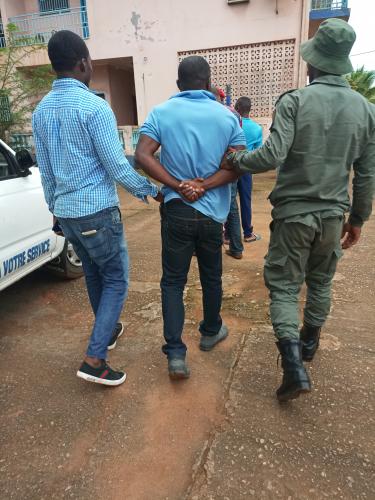 Two soldiers and an alleged wildlife trafficker have been arrested in Yaounde for pangolin scales trafficking. The two soldiers, a sergeant, formerly working with the Presidential Guard, and a navy second class soldier were arrested by elements of the Odza Gendarmerie Brigade and the Mimboman Gendarmerie Company. They were arrested in collaboration with the Centre Regional Delegation of Forestry and Wildlife as they attempted to sell pangolin scales.

Close to 400kg of pangolin scales were recovered during the arrest that took place on June 7, 2020. The operation was carried out with the technical assistance of LAGA, a Non-Governmental Organisation specialized in the fight against wildlife criminality.

The two soldiers were caught at the Odza neighbourhood and taken to the Mimboman Gendarmerie Company. On arrival at the Company, the sergeant claimed the scales were given to him to sell by one woman. The gendarmerie elements immediately carried out a swift raid at her premises and she was apprehended at the Ekounou neighbourhood. She had sent the son, the second class soldier with the Cameroon Navy who was also arrested, to represent her at the transaction to sell the scales. She is a well-known bushmeat trader at the Nkolndongo wildlife market in Yaounde.

According to investigation reports, the sergeant is a regular bushmeat customer to the suspected trafficker. He deployed and depended on his military status to sell close to 400kg of pangolin scales.  Several conservationists have been decrying the dubious role some law enforcement officials play in the trafficking of wildlife products in the country. In 2017, 216 elephant tusks and 81 elephant tails were seized from the car of a gendarmerie colonel and two were arrested in Djoum.

During another operation in May 2019, a Garoua-based police constable was arrested in Yaounde in connection with the killing and trafficking of protected wildlife species at the Bouba Ndjida national park. He was arrested with 5 lion skulls, leopard skin, and an elephant tusk. Speaking on the phone from Nairobi, the Director of LAGA, Ofir Drori, apparently impressed by the work of the gendarmerie declared "All those arrested explicitly declared that the value of the uniformed men in their trafficking ring, was of impunity in their illegal dealings. In this crackdown, the Government of Cameroon sends a strong message that criminals cannot hide behind their uniforms".

According to the Convention on International Trade in Endangered Species of Wild Fauna and Flora (CITES), pangolins are the most trafficked and poached mammal in the world, primarily due to the demand from Chinese consumers for their supposed medicinal qualities. The conservation group WildAid, say as many as 200.000 pangolins are consumed each year in Asia. Despite pangolins being at the spotlight since the start of the Covid-19 outbreak, as studies suggest they may have been the intermediate host that transmitted the virus to humans, the traffic of this fragile species continue to thrive.

China that has received most of the criticism for its pangolin trade, early in the month of June raised the protection status of pangolins to the highest level, the Guardian news site reported recently. The site also posted that pangolin scales have been delisted from an official 2020 listing of ingredients approved for use in traditional Chinese medicine. Many conservationists and wildlife crusaders, hope the recent move by the Chinese government will help end the global trade in pangolin. The animal is totally protected in Cameroon and regulated by the legislation. The law therefore targets those who illegally handle the species.