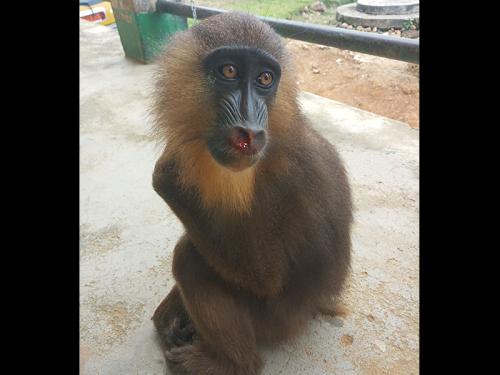 Three people have been arrested during two separate operations in Yaounde and Lolodorf for trafficking in mandrills. The operations were carried out by wildlife law enforcement officials in both towns. The first operation took place at the Nkoabang neighborhood in Yaounde while the second at Lolodorf where mandrills live were seized.

During the first operation, the alleged trafficker was arrested by wildlife officials of the Center Regional Delegation of Forestry and Wildlife in collaboration with the Gendarmerie Brigade of Nkoabang as he tried to sell the protected species. According to sources close to the case a veterinarian had earlier told the suspect that the animal was fast growing and he wouldn't be able to cater for it. The suspect tried to illegally sell the mandrill after being advised by the veterinarian to part ways with the animal. After fierce opposition from family members of the suspect on the ownership of the animal, he finally admitted to own the animal and wanted to sell it.

Few days later, two other traffickers were arrested in Lolodorf with another mandrill. The crackdown operation was led by the Forestry and Wildlife Control Post and the gendarmerie brigade of Lolodorf. The two alleged traffickers were arrested, shortly after they arrived on a motorbike with the young mandrill at Lolodorf from Bipindi. The mandrill sustained an injury during a motorcycle accident the traffickers had along the way, it was learned after their arrest.  A rope was tied around its waist and the poor state of the animal indicated it may have been poorly treated during captivity. The two suspects were skillful and very careful not to be caught as they moved at night to pass undetected, declared a source close to the case. The same sources say because they used the cover of the night to move the mandrill, they knew the activity was illegal. The two operations were technically assisted by LAGA, a non-governmental organization.

The mandrill is a totally protected species according to the 1994 wildlife law that prohibits poaching and trafficking of the animal.  Anyone found in possession of parts of a protected wildlife species is considered to have killed the animal and is liable to a prison term of up to 3 years and or a fine of up to 10 million CFA francs.

The Ministry of Forestry and Wildlife has intensified the fight against illegal trafficking of protected species during this period of the COVID-10 pandemic.  Rightly so if we consider the recent studies from the IUCN Wildlife Health Specialist Group that shows that the novel coronavirus is a danger to both primates and humans. Josef Settele, a biologist at Helmholtz Center for Environmental Research (UFZ) posits that "The unregulated trade in wild animals is likely to have been the catalyst for the COVID-19 pandemic, which started in a live animal market. Scientists are still unsure exactly which species passed the virus to humans, but it is certain that the way we treat animals plays a part how contagious diseases begin and spread."