Policeman and three others arrested for wildlife trafficking 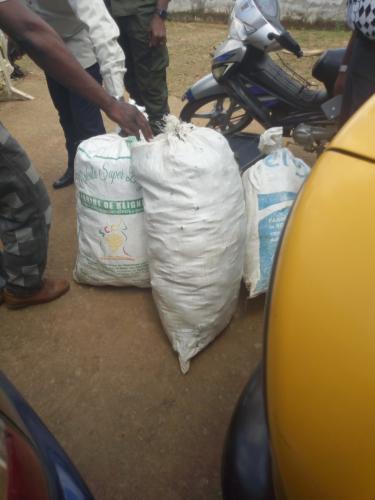 Four people have been arrested in connection with the trafficking and illegal sale of pangolin scales in Yaounde. The four, including a policeman, were arrested during an operation carried out by the Centre Regional Delegation of Forestry and Wildlife in collaboration with the police that found them discussing the illegal sale of the pangolin scales that were loaded in two cars. The operation was carried out with the technical assistance of LAGA, a wildlife law enforcement support body.

They had transported the pangolin scales on board a Toyota car from Djoum, passing through Sangmelima and arrived Yaounde where they attempted to sell the scales. When they arrived Yaounde, they took up station at the Kondengui neighbourhood and would later move with the scales to the Nlongkak neighbourhoon to do business when police and wildlife officials swooped in to arrest them. One of them attempted to escape but was stopped in his tracks.
According to sources present during the operation that spoke on condition of anonymity, a policeman, who had a jacket over his uniform was found among the suspects and arrested alongside the three others. He had accompanied them to the site of transaction. When police found  the traffickers, he presented himself as a policeman but was told by his colleagues that it matters less. They were taken to the 10th District Police Station in Yaounde where legal proceedings were carried out.

The traffickers had bought the scales from local poachers in several villages in the South region, including Meyomessi, Mintom and Lele. They parked the scales in suitcases, knack sack and stuffed some in several spaces in the car, including under the carpets of the car and other hidden corners. When they arrived Meyomessi mixed control post comprising gendarmerie, police and wildlife officials, they car was searched and found to contain the illegal cargo and they had to pay a bribe of 400 000 FCFA to continue their journey to Yaounde.
The arrest is the latest in a series of pangolin scales operation that have been carried out by wildlife officials recently. On August 18, six people including two Central African nationals were arrested with over 700kg of pangolin scales while two weeks ago, elements of the Akwa Gendarmerie Brigade arrested four people with over 400kg of pangolin scales. The recent increase in arrest operations targeting pangolin scales traffickers is a result of improved enforcement measures and new-found determination at the level of the Ministry of Forestry and Wildlife to tackle the illegal trade.
All three species of pangolin scales are totally protected and they face to 3 years’ imprisonment and or a fine of up to 10 million FCFA, if found guilty. The policeman however may have his punishment doubled according to the stipulations of the law. Pangolins are totally protected by the wildlife law which is a reflection of the Washington convention that regulates the international trade in wildlife species. Cameroon is a signatory to that convention and has an obligation to respect the terms the country signed up to but bribery and corruption, as witnessed in this case, play a powerful role in negating the efforts being done.