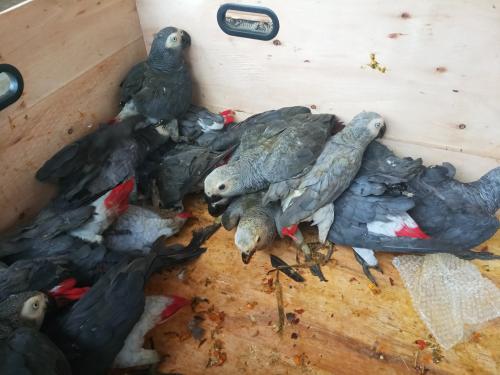 Two suspected wildlife traffickers have been arrested in Ebolowa for trafficking in African grey parrots.

The two men were arrested at the New bell neighbourhood, in Ebolowa on September 17 during an operation carried out by wildlife officials of the Mvila Divisional Delegation of Forestry and Wildlife, in collaboration with the Police.

They were apprehended with 20 African grey parrots in their hideout at New Bell as they attempted to sell the birds.  They were later taken to the Police Station and are presently behind bars. The operation was technically assisted by the Last Great Ape Organisation (LAGA), a wildlife law enforcement body.

Investigations reveal that the suspects are connected to a bigger parrot trafficking network in the country including Nigerians and Ghanaians. According to a source closed to the case, who spoke on anonymity, the parrots were captured at Ma'a, Mvangan and Nyabizan.

The African grey parrot is a medium-sized, predominantly grey, black-billed parrots. The grey color on the head and wings is generally darker than its body. The head and body feathers have slight white edges and the tail feathers are red.  Both sexes appear similar and are found in Equatorial Africa including Cameroon, Nigeria, Ghana, the Congo, Gabon, Angola, Kenya, Uganda and Ivory Coast. Grey parrot can imitate a wide variety of sounds they hear.

African grey parrots were recently up listed to "endangered species" on the International Union for Conservation of Nature's red list due to the drastic drop of its population. The species has been among the most frequently traded of all bird species listed under the Convention on International Trade in Endangered Species of Wild Fauna and Flora (CITES) in 2018.

Trade in the species is therefore banned by the UN's Convention on International Trade in Endangered Species of Wild Fauna and Flora for which Cameroon is a signatory.