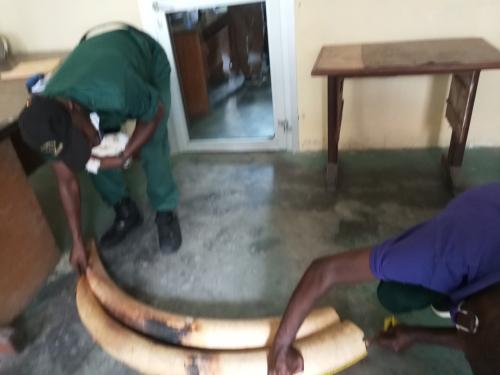 Three people have been arrested for elephant ivory tusk trafficking in Douala in the Littoral region. They were arrested during a crackdown operation carried out by the Littoral Regional Delegation of Forestry and Wildlife in collaboration with the Police. The operation was also carried out with the technical assistance of LAGA, a non-governmental organization. They were found with two ivory tusks in the trunk of their car during the arrest.

The two of the three suspects were arrested at the Bonamoussadi neighborhood when they were about carrying out an illegal transaction that involved the sale of two ivory tusks weighing over 26kg. The two men transported the ivory tusks in the trunk of a car. They had carefully and skillfully wrapped the tusks which were found inside a bag. The car belongs to a customer at the automobile repair workshop where one of the traffickers works.

Further investigations by wildlife officials led to the arrest of the third trafficker. She was nabbed a couple of hours later at the Cite des Palmiers neighborhood on her way to church. According to sources close to the case, she gave the ivory tusks to one of the arrested traffickers to sell.  Following preliminary investigation, it was found out that one of the traffickers belongs to a larger network dealing in illicit trade in wildlife, mining products including ivory and gold.

African elephants are the largest land animals in the world today. The average African elephant will grow to between 2.5 to 4 meters tall measured from shoulder to toe according to National Geographic. Female elephants also called 'cows' have the longest gestation period of all mammals, lasting as long as 22 months. They are herbivores and can eat as much as 150kg of food daily because of their size. They also passed out most of the grasses and plants they eat undigested and can deposit 150kg of dung in a day. African elephants have tusks made of ivory and are present in both male and female elephants. Unfortunately, man's greed for ivory has led to a massive decrease in the population of African elephants. Only 400.000 elephants are estimated to be left today in the world against 1.3 billion in the 1970s.

Elephants are classified as protected species according to the wildlife legislation governing the sector. Thus trafficking of elephant's parts is totally prohibited. The law stipulates that anyone who is found in possession of any part of a protected wildlife species is considered to have killed the animal and is liable to a prison term of maximum  3 years and or a fine of up to 10 million FCFA.

The Convention on International Trade in Endangered Species of Wild Fauna and Flora (CITES) in 1989 laid a total ban on the international trade in ivory to protect elephants from the scourge of poaching. The ivory trade, highly prized in Japan and China for carving, jewelry, traditional stringed instrument, and name seals, causes the death of 40,000 African elephants each year. In the past decade, their population has shrunk by 110,000 animals to 415,000 specimens, according to the International Union for Conservation of Nature (IUCN). It is in this light that China and Japan, the main consumers of ivory, banned the trade in ivory on their territories. This may be considered as a rising commitment to fight for the protection of this endangered species.