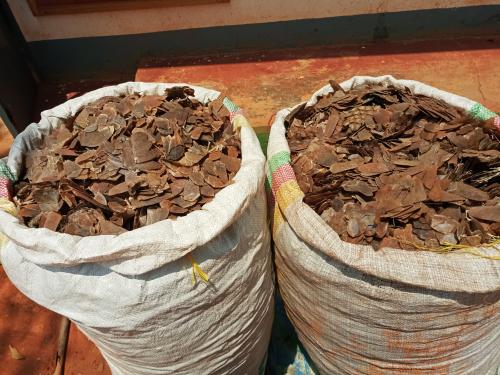 A suspected wildlife trafficker has been arrested in Bertoua in the East Region of the country for trafficking in pangolin scales. The operation was carried out by wildlife officials of the Lom and Djerem Divisional Delegation of Forestry and Wildlife in collaboration with the Gendarmerie. LAGA, a wildlife law enforcement support body provided technical support during the operation.

The alleged trafficker was caught with two bags of more than 100kg of pangolin scales by wildlife officials as he attempted to illegally sell the scales. The confiscated scales are estimated to represent about 250 pangolins massacred.  Further investigations led to the searching of his home where a small quantity of pangolin scales, parceled in a black plastic bag and hidden in his kitchen, was seized.

According to a source close to the case who requests for anonymity, the suspected trafficker regularly purchased the scales from several smaller traffickers in some localities in the region including Mampang, Mendin, Moutcheboum and Doume. He would store the scales at his home for his accomplices who came in from some big cities to collect.

Pangolins are the most illegally trafficked mammals in the world today despite its protected status and its possible link with the Covid-19 pandemic. The species continues to be highly trafficked, and the situation has pushed many conservationists to request for harder wildlife legislations against pangolin traffickers as a means to curb the trafficking. They argue this may be a preventive measure against  zoonosis.

The animal is totally protected in Cameroon and regulated by the wildlife legislation which  states that anyone found in possession of parts of a protected wildlife species is considered to have killed the animal and is liable to a prison term of up to 3 years and/or a fine up to 10 million CFA francs.