A pangolin trafficker sentenced to more than a year in prison 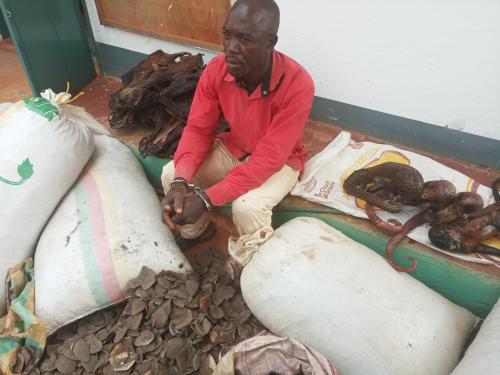 A wildlife trafficker has been sentenced to more than a year in prison by the Bertoua Court of First Instance for trafficking in pangolin scales.

He was found guilty by the court on March 8 for illegal possession of protected wildlife species including pangolin carcases and scales among others. The judge sentenced the trafficker to one year, seven months in prison, as a deterrent punishment to persuade potential traffickers from entering into the illegal business and to warn old hands in the game that they would surely face the law if arrested.

He was arrested last month at his home in Bonis, some 9 km from Bertoua during a crackdown operation carried out by wildlife officials of Lom & Djerem Divisional Delegation of Forestry and Wildlife with the technical support of The Last Great Ape Organisation - a wildlife law enforcement body also known as LAGA. 246kg of pangolin scales were recovered hidden in an uncompleted building that belongs to him and 3 pangolin carcases and caresses of monkeys were discovered in a refrigerator at his home. The 246kg of pangolin scales represent a massacre of more than a thousand of pangolins.

The court's decision came just few days after the celebration of World Wildlife Day during which many animal advocates and well-wishers including the World Animal Protection, an international non-profit animal rights organization called for stringent measures to enact policies to protect wildlife. The decision, falls in line with the call. The Convention on International Trade in Endangered Species of wildlife Fauna and Flora (CITES) data base shows that an estimated 1.6 trillion wild animals are killed by humans every day and tons of animals such as pangolins are trafficked yearly. The rate of killing requires stiff punishment to deter trafficking.

The pangolin is an endangered species according to the International Union for Conservation of Nature (IUCN) Red list of threatened species. The species fall under Category A of classified animals of the country and the 1994 wildlife law stipulates that anyone found at any time or place, in possession of part or whole of a protected species shall be considered to have killed the animal.