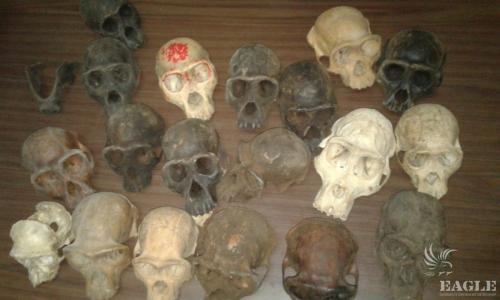 Despite many obstacles, tangible achievements were made over this period in LAGA’s collaboration with MINFOF in the fields of investigation, arrest, prosecution, media exposure, government relations and international activities. Focus was on the fight against corruption, the illegal wildlife trade especially the specialized illicit trade in ape parts including fresh chimpanzee and gorilla heads, limbs and skulls; ivory and elephant products trafficking and the illicit trade in giant pangolin scales and leopards skins . The wildlife law enforcement operations carried out this year also busted international connections in ivory trafficking, ape parts and giant pangolin scales. This year, LAGA focused on the illegal trade in ape skulls uncovering a shocking snapshot of this specialized trade with 89 ape skulls and some bones seized.

80% of those arrested stayed permanently behind bars from the moment of arrest and during the trial process while 16% were granted bail along the line and 4% were released and never prosecuted. Corruption was observed and fought in more than 80% of the cases. Operations focused on the illicit trade in ape parts and the trafficking in ivory. 50 new cases were brought to court, 30 traffickers were found guilty and given prison sentences, fines, damages and penalties and more than $147,488 to be paid as damages. Media exposure was at a rate of more than one media piece per day.

One new project -EAGLE Uganda, within The EAGLE network, became functional, and produced important results in its first year while the entire network became very effective with significant results and important exchange and training visits among various projects done. This was carried out principally under the EAGLE Exchange programme with investigators and legal advisers from Senegal, Congo, Togo, Benin and Gabon visiting the country.

Governance issues and breach of procedure by some MINFOF delegations were prominent during this period – refusal to prosecute arrested wildlife traffickers and subsequently releasing them, influence, peddling and threats were observed and correspondences sent to the Minister to address the situation.