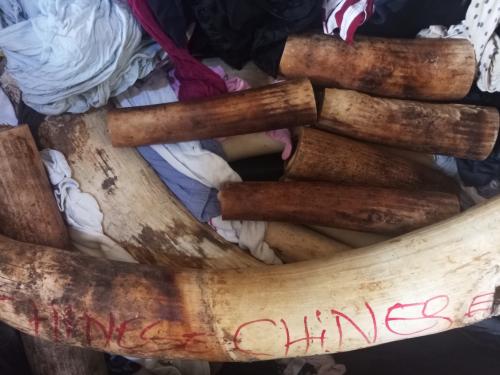 Many achievements were recorded in LAGA's collaboration with the Ministry of Forestry and Wildlife (MINFOF) despite several challenges posed during the year. These achievements were obtained in the fields of investigation, arrest, prosecution, media exposure, government relations and international activities. Focus was on the fight against the illegal wildlife trade; principally trafficking in pangolin scales, elephant tusks, primates, birds and leopard skins. The EAGLE network's Central Coordination Unit (CCU) continued to provide vital technical and organisation support that facilitated several operations resulting in a significant number of arrests. 43 traffickers were arrested.

43 major traffickers were arrested at a rate of one for every 9 days and 64% stayed behind bars from the day of arrest.

42 new cases were brought to the courts. 26 traffickers were found guilty and handed prison sentences, fines and damages in 16 court judgements.  Damages amounted to some 128,206,627 FCFA (about $256,417) awarded to MINFOF. Five appeals were lodged against unsatisfactory court rulings.

Media exposure was at a rate one media piece per day.

The EAGLE network achieved substantial results and 141 traffickers were arrested across 7 countries. In order to provide a deterrent effect across the Network, 1,966 media pieces were published in national media.