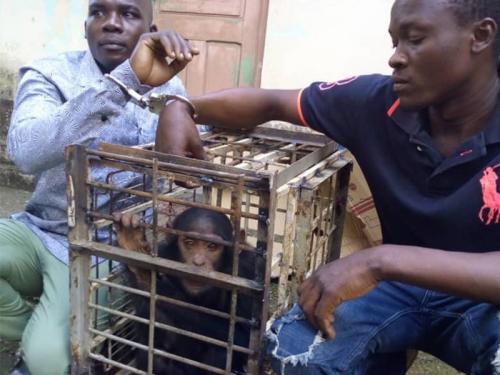 Two suspected chimpanzee traffickers have been arrested in Douala for unlawful possession of a chimpanzee during a crackdown operation carried out by the Littoral Regional Delegation of Forestry and Wildlife. The two who transported the animal hidden inside a carton box where arrested as they attempted to sell the 3-year old chimpanzee.
The main culprit, a 30-year-old man, had been keeping the chimp for some time and decided to sell it. It is in the process of trying to sell the chimp that he was arrested. He arrived on a bike with the chimpanzee that was placed inside a cage and hidden inside a carton box to avoid people seeing what he transported. The carton box was strapped on a bike and when he arrived the scene of transaction, he called for an accomplice who had been keeping watch over the area and they both unloaded the box and stepped into a nearby bar. Wildlife officials and policemen entered the bar to find the two seated with the cage in front of them. The little chimpanzee that looked feeble and hungry, gazed at the tumult around it with helplessness.
According to sources close to the case that requested anonymity, the suspected trafficker had for the past two days before his arrest, tried to sell the chimp but went about the business cautiously because he understood the danger, that he could be arrested. He had placed his accomplices around a bar in the Ange Raphael neighbourhood where he expected to sell the chimp. The accomplices, sources said, arrived the scene of transaction long enough before he arrived. They searched and inspected the areas to make sure that no police or wildlife officials were present. Unbeknownst to them, the operation team knew about their movements and had taken measures to guard against their escape.
The arrest of another chimp trafficker in Douala is indicative of the extent of trafficking in the town as a man was arrested last year at the entrance to the Douala airport freight terminal. He had loaded two chimps in his car, drove the car from Bonaberi and arrived the entrance to the airport before he was stopped short by wildlife officials.
The illegal trade in young chimp generally starts with the killing of their mothers whose parts are trafficked to supply the illegal bushmeat market. This trafficking is a growing business, like many other illegal wildlife trafficking making professionals who require special skills to keep and transport apes for sale. The extent to which the trafficker went to conceal the animal was baffling as it was difficult to know a chimp was being driven across town on a bike.
The two suspects are presently behind bars as prosecution proceedings continue and investigations to arrest the third suspect who escaped when he saw the two being arrested, are still to be carried out.