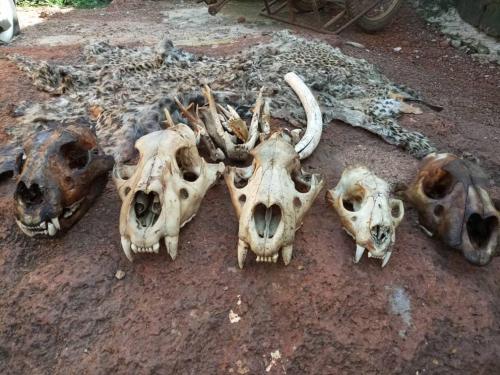 A Garoua-based policeman has been arrested in Yaounde in connection with the killing and trafficking of wildlife products at the Bouba Ndjida national park. The police constable was arrested at his hotel room in Odza, Yaounde with an ivory tusk, a leopard skin and 5 lion skulls. The arrest was carried out by the centre regional delegation of forestry and wildlife working in collaboration with the Odza gendarmerie brigade. A wildlife law enforcement support body known as LAGA provided technical support during the operation.

According to prior investigations, he travelled with  the products in his car from Garoua to Ngaoundere and boarded a commercial bus to Yaounde where he took up lodging at the Odza neigbourhood. He made attempts at selling the products but his illegal activities had been under investigation right from his outpost at the Bouda Ndjida national park where he was stationed. He was in charge of security and protection of wildlife at the Zone 12 hunting areas surrounding the park. He violently resisted being arrested and tried to give orders to the gendarmes who were handling the matter.
At his outstation, he is suspected to have connived with poachers around the park and acted as a cover for them, ferrying the illegal products and connecting with buyers around the country, according to investigation reports revealed by unnamed sources close to the case. He activated a close group of poachers and offered them protection and business openings. Shortly before his arrest, he had sold two fresh feline skins. Other investigation reports say he acted as the main man covering the trafficking of wildlife species in the town of Garoua. He used his position as a police officer to move wildlife products around with impunity.

The Bouba Ndjida park came into prominence in 2012 when poachers from Sudan razed it with AK 47 refiles and rocket propelled grenades, killing hundreds of elephants over a period of a couple of months and made away with their tusks. The world woke up to the grim reality and government responded with the stationing of the military in the park. The is the most diversified in the country hosting several wildlife species including lions, elephants, giraffes, hippopotamuses, Lord Derby elands and several other iconic antelope species.
It should be noted that if found guilty, the policeman faces the possibility of seeing his punishment doubled because according to the law, anyone found in possession of parts of a protected wildlife species is liable to up to 3 years’ imprisonment and or a fine of up to 10 million FCFA and this shall be doubled if the defaulter is a law enforcement officer.
The arrest points to a difficult conservation problem in the country and asks fresh questions on how parks are to be rendered safe without the presence of the military and other law enforcement personnel who are simply not trained for such functions.
Photo: wildlife products seized form policeman